The question of whether or not kids can learn to play on an electric guitar is one that is commonly asked by parents. The temptation is to simply buy your child an entry-level nylon-stringed classical guitar before finding them a traditional guitar teacher.

Whilst there is nothing necessarily wrong with this approach, is it really the only sensible option?

If your child has expressed an interest in learning to play the guitar, the chances are that they have been inspired by listening to their favorite guitarist or band.

Their favorite guitarist is most unlikely to have been playing Greensleeves or some obscure classical piece on an unamplified nylon classic guitar. 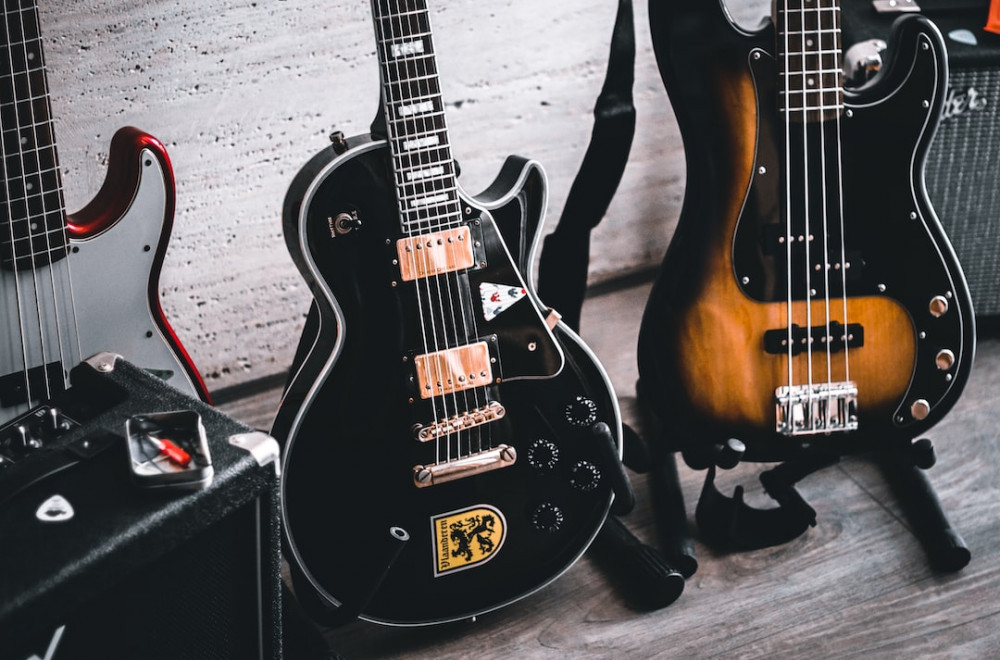 Given that fact, is it really sensible to just go out and buy your child a classical guitar when the sounds that it is capable of generating are nothing like the sounds that inspired them to want to play the guitar in the first place?

This is a somewhat controversial issue amongst guitar teachers, but here is my take on the question of whether kids can learn to play on an electric guitar.

The traditional advice is that you should buy your child a classical guitar as their first instrument. You’d also be told that they should take lessons from a traditional guitar teacher using that classical guitar and perhaps study for exams. After a couple of years, they may then transition to an electric guitar.

As I have previously mentioned, there is nothing wrong with this approach if that is what you and your child want to.

The idea, however, that this is the only legitimate approach for a child beginning to learn the guitar is very outdated and, in my view, simply incorrect.

There is absolutely no good reason why your child shouldn’t learn to play on an electric guitar if they want to.

Electric guitars are available to buy in smaller sizes to suit the needs of a child.

There are also many qualified teachers who are happy to teach a child on an electric guitar from the very beginning. You may need to look a little harder to find one, but they are certainly there to be found.

There are even a number commercial alternatives to the traditional 1-on-1 approach to lessons that are specifically geared towards kids wanting to learn rock music in a group setting. There are plenty of “Rock School” type franchises in existence that can either be used instead of traditional lessons or used to compliment those lessons. Indeed, one of my own children learned to play the guitar by attending one of these Rock Schools as well as taking 1-on-1 formal lessons, and he absolutely loved it! 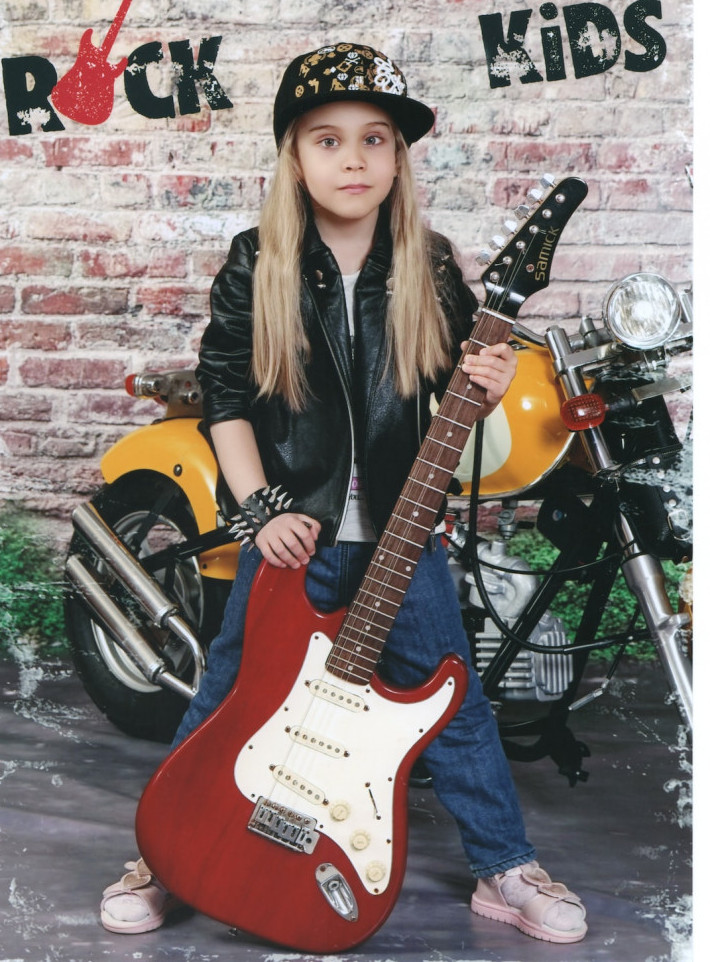 If you are not familiar with the structure of these Rock School sessions, they go something like this.

Instead of a 30-minute lesson with a teacher, your child will be one of a handful of students playing different instruments at a session lasting 2 hours or so. The first half of the session will involve qualified instrument teachers providing tuition.

So, the guitar students will go to one part of the venue with the guitar teacher and receive appropriate tuition. The drummers will go to a separate area for their lessons and so on for the other instruments. There may even be a vocal coach for any kids that want to be a lead singer in the band.

The second half of the lesson will involve all of the kids getting together and, with the help of the various instrument teachers, actually playing some of the songs that they have been working on in their separate groups.

So, not only do they get to learn how to play their instruments, but the kids also get a great opportunity to start developing the extra skills required when playing with others in a group.

There are a number of different types of electric guitar that can be bought in kids’ sizes. Here are some of the main options.

The vast majority of electric guitars that are bought and sold worldwide are copies of the famous Fender or Les Paul styles. For a child beginner, it probably doesn’t make a great deal of difference if you choose a Fender or Les Paul style. Until your child gets more experienced, the main focus will be learning to strum/pluck the strings and make basic chord shapes. The specific shape of the guitar will not have much impact on this process as they learn to play.

The one thing that I would strongly suggest, though, is that if the guitar comes fitted with a tremolo bar, it might be a good idea to remove it while your child is a beginner guitarist. Tremolo bars tend to be a bit of a distraction, can cause the guitar to go out of tune more regularly as your child keeps messing about with it, and they really are for more experienced players.

If your child fancies themselves as a little Ed Sheeran or Passenger, or you simply want them to be able to play the guitar without amplification as well as with amplification (needed for any Rock School group work), you should consider an electro acoustic guitar.

The Loog Guitar company has designed an innovative alternative for young kids who want to learn to play the guitar. 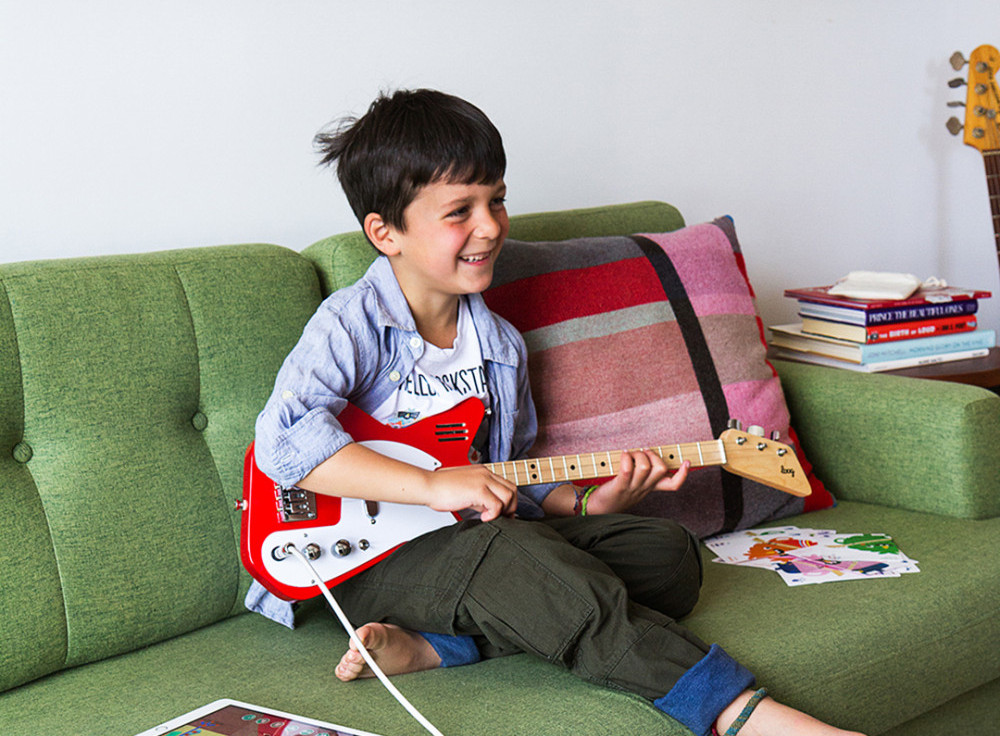 The Loog guitars have 3 strings instead of the traditional 6 strings. These 3 strings are tuned in the same way as the 3 highest pitched strings on a 6-string guitar (E, B, G).

There are a number of benefits to the Loog guitars. Firstly, they allow much younger kids to get the opportunity to play a guitar that sounds good because the 3-string set up means that much smaller hands can manage the fret board. The Loog guitars are easier to handle due to their small size.

Of course, they are more limited in the sounds that they can produce given that they only have 3 strings, but most chords are only comprised of 3 notes. So, with the Loog guitars, you can still play the necessary chords, albeit that the sound is not as “full” as with a 6-string guitar.

On final point to make is that kids attending Rock School to play the guitar are often taught modified and simplified chord shapes that only use the top 3 strings of the guitar, until their hands are big enough to manage the full chord shapes.

So, the Loog guitars aren’t for everyone, but they are an option to consider, especially for very young kids.

The one slight drawback of buying your child an electric guitar is that you will probably need to buy some extra equipment that if you simply bought them a nylon-stringed classical guitar. 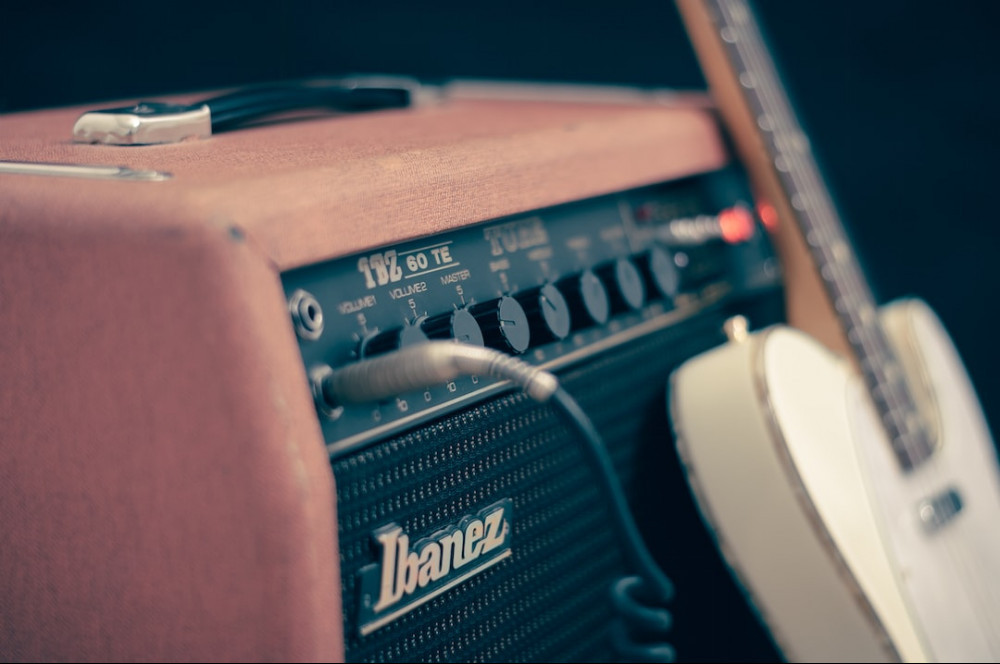 If you buy your child an electric guitar, you will certainly need to also buy an amplifier, a lead, and some picks.

If they want to be able to play standing up (like a real rockstar), they will also need a strap for their guitar.

If they will be transporting their electric guitar to lessons or Rock School, a carrycase will be essential if you want to keep the guitar in an undamaged condition.

Finally, for your own sake, get them some headphones!

The best type of guitar to buy for your child to learn on is quite simply the one that they will be inspired to pick up and practice on regularly.

If you buy your budding rockstar or heavy metal guitarist a classical guitar, you are simply increasing the chances that they will refuse to practice, get bored and, ultimately, quit playing.

It will be a waste of your money and a missed opportunity for your child to learn to play the guitar, which is an activity that could provide them with a lifetime of enjoyment and potentially a career if they become good enough.

So, if your child loves rock music and wants to play an electric guitar, just let them.

Ignore the outdated traditionalists who continue to try to force all kids to learn on classical guitars at the start.

If you have any questions about kids learning to play on electric guitars, please just leave a comment below.

Guitars need to be tuned on a very regular basis. If you want to avoid the inconvenience of constantly having to tune your child's guitar for them, I strongly advise you to teach them how to do it for themselves right from the start. It's … END_OF_DOCUMENT_TOKEN_TO_BE_REPLACED

All kids should have the opportunity to learn to play a musical instrument. Even if they don't intend to pursue a career in music, the process of learning to play an instrument will promote the development of some very valuable qualities in … END_OF_DOCUMENT_TOKEN_TO_BE_REPLACED

The question of whether or not kids can learn to play on an electric guitar is one that is commonly asked by parents. The temptation is to simply buy your child an entry-level nylon-stringed classical guitar before finding them a … END_OF_DOCUMENT_TOKEN_TO_BE_REPLACED

Unless you are a guitarist yourself, choosing the right guitar for your child can be very confusing. If you are not careful, you can waste a lot of money buying the wrong guitar. I have written this Guitar Buying Guide For Kids to help you … END_OF_DOCUMENT_TOKEN_TO_BE_REPLACED